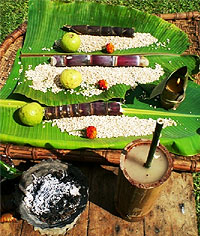 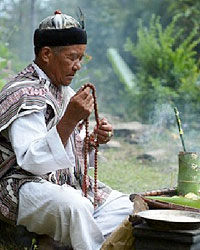 Though today the majority of people settled in Sikkim follow Hinduism, Sikkim has certainly preserved its deep roots with Buddhism to this day.

Buddhism is not a religion as per western understanding but a philosophy that is founded by the historical Buddha’s own experience. Overcoming suffering through practicing a system of learning known as ‘the noble  eightfold path’ is its aim.

Due to historical, geographical and cultural manifestations this system took different forms. In the Himalayan belt from Ladakh in the west to Arunachal Pradesh in the east, mainly the tantric Vajrayana Buddhism is practiced. 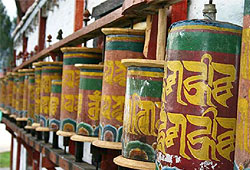 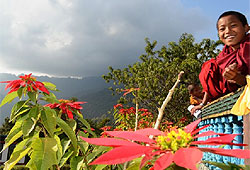 Vajrayana Buddhism of the Nyngma order is Sikkim’s state religion and about 200 Buddhist monasteries and temples adorn the most beautiful spots of the mountain state. Monastic mysticism, lamas (monks) and nuns wrapped in red robes, fluttering prayer flags and rotating prayer wheels characterize the image of the erstwhile kingdom. On the other hand the Lepchas native shamanist religion ‘Mun’, the religion of the Limbu that follows the Kirant teachings similar to Bön and the animist beliefs and practices of different people of Nepal take place less conspicuously throughout the land. 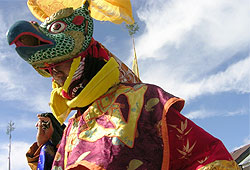 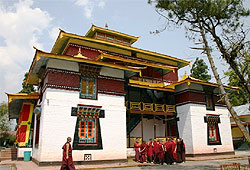 Many pilgrims from far and near – especially followers of the two oldest schools of Tibetan Buddhism Nyngma and Kagyu, come to Sikkim to visit its holy sites or to receive blessings, inspiration and teachings from high lamas. According to the legends, anyone who visits these sacred sites 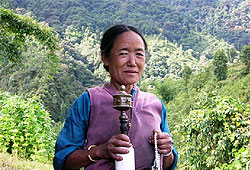 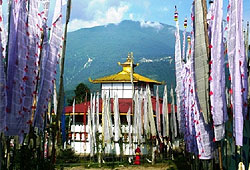 Are you intrigued by what you have heard about Buddhism so far and would like to learn more? Looking for a awakening experiences and don’t know where and how to find them? Eager to witness the power of mystical places like sacred caves, hot springs and lakes? Would you be interested to gain insights into Sikkim’s monastic culture, Buddhist festivals or the meaning of ceremonies and rituals? 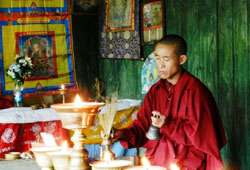 Do you want to learn more about Buddhist teachings and meditation practices through interaction with rimpoches, tulkus, lamas, nuns or teachers of Buddhist philosophy?

Or have you already immersed yourself into the Himalayan Buddhist culture and know what the region has to offer?

Then you may consider going on a mystical journey with us. 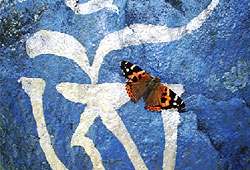 Depending on your interest we

In line with our philosophy we can open doors and bridge worlds for you. But you yourself will have to step through.

Before the arrival of Tibetan immigrants the indigenous Lepchas practiced ‘Mun’, a shamanist/animist religion. When the Tibetans from the Kham district came to Sikkim, Buddhism of the Nyngma-order in the 15th century also began to spread amongst the Lepchas as well. The Lepcha’s Mun-religion easily blended or co-existed with the practices of Buddhist Nyngma-traditions and rituals. The saint and great tantric teacher Padmasambava, also known as 'Guru Rimpoche' who introduced the tantric Vajrayana-Buddhism to Tibet traversed Sikkim several times on his journeys between India and Tibet in the 9th century. He referred to Sikkim as “Bay-Yol-Dre-Ma-Jong " – "hidden land of treasures, fruits and flowers" and declared it to be the holiest of all holy lands he visited. His interaction with the Lepcha people in Sikkim is also mentioned in the Lepcha historical records. Guru Padmasambhava is said to have meditated in Sikkim’s various different caves and by lakes while blessing the land. He predicted that in this land the teachings of Buddhism would revive after having been destroyed by dark forces in Tibet. Today Sikkim with its sacred sites is a favorite destination for Buddhists and spiritual people from around the world.

Guru Padmasambava is also said to have hidden vast religious treasures, including holy books, ritual objects and relicts to be discovered and interpreted in future, by great saints.
It was part of the fulfilment of this prophecy when the Buddhist Masters Lhatsun Namkha Jigme (or Lhatsun Chempo), Kathok Rikzin Chempo and Nagadak Sampa Chempo came to Sikkim to propagate Buddhism in the 15th century. They were received by the Lepcha Chief Thekung Mensalong at “Yoksum” – “meeting place of three lamas”. These three lamas invited Phuntsog Namgyal and consecrated him as the first Chogyal (king) of Sikkim in 1642 A.D, at Yuksam, where the stone throne can be seen even today.

Lhatsun Chempo was largely responsible for consolidating Buddhism in Sikkim. He built Dubdi Monastery near Yuksam (Yoksum). Later, he built shrines at Sanga Choeling (1697) and Pemayangtse. He spent his years in Sikkim mostly exploring caves, mountain recesses and holy places, composing Buddhist legends and selecting sites for shrines, chortens (stupas/shrines) and monasteries. After his death, his personal effects were carefully treasured and worshipped by the Sikkimese as religious objects. By the time of his death, Buddhism had steadily progressed in Sikkim and the monasteries then belonged to Nyingma order and its sub sects. It was during and subsequent to the reign of the fourth Chogyal Gyurmed Namgyal in the beginning of the 18th century that the first Kagyu monastery was established at Phodong in North Sikkim. Since then many large and small monasteries belonging to these two sects have been built influencing the cultural heritage and lifestyle of the people profoundly.

The Himalaya has attracted mystical seekers since millennia. Nowhere on earth are you as close to the sky as here. This is true both in regard to the very profane geographic height as well as in a figurative sense: Probably nowhere else on earth are there as many sacred venerated mountains, lakes, rivers, caves, temples and monasteries as in the Himalayan belt. There is hardly a place in these magnificent mountains that lacks a record of history or devotion.

For the animistic religions of the mountain-folks who used to roam the area as hunters and gatherers, nature offered countless sacred places of worship such as waterfalls, hot springs and particularly old trees. Hindu temples are irrevocably located in places where something extraordinary, something magical or mystical occurred. Each temple tells its story of how one of the many Hindu gods visited the place and accomplished a special miracle.

Buddhist shrines mostly refer to historical persons who meditated in special places such as caves. It is believed that these places were blessed with healing power by their presence. Milarepa and Padmasambhava are amongst these historical persons, besides many others. The latter has left countless foot- and hand-prints on the rocks of the eastern Himalaya that are being worshipped even today.

Besides natural sacred places and places of nature worship there are also numerous sacred shrines and buildings. Most temples, monasteries and shrines (Chörten) in the Indian and Nepalese Himalaya – opposite to Tibet – have escaped destruction. Many of them are centuries old, if not millennia. They radiate an unforgettable charm that doesn’t leave anyone untouched and focuses our attention towards the inside – away from stress and the cool rationality of western everyday life.