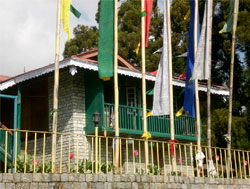 Just as colourful as the land, as open and warm-hearted are the people of Sikkim. Sikkim’s indigenous people include the Lepcha, Bhutia (Bhotia) and the Limbu (Tsong/Limboo) in contrast to the dominant heterogenous Nepali population. 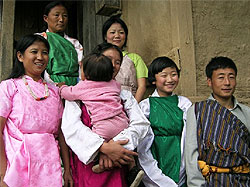 Thanks to our extensive personal contacts throughout the land our cultural journeys allow you to gain extraordinary deep insights into the land and its people. We have contributed substantially to the promotion and development of sustainable village-tourism throughout the state and beyond. By integrating authentic village-tourism through the concept of win-win, both visitors and villagers are bound to benefit. To achieve this we not only continue to test selected homestays and village-interaction but we also contribute actively in educating and training stakeholders to contribute to intercultural understanding, cultural awareness and preservation. Through participation in our village-tourism activities you help preserve the indigenous cultures, identity and way of life of Sikkim while gaining deep insights. 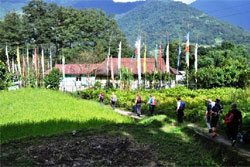 Typically our cultural journeys are characterized by

For more information on our homestays and village-tourism go to:www.himalayanhomestay.com 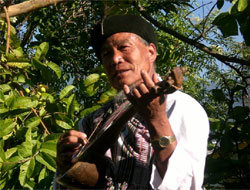 The Lepcha are Sikkim’s original inhabitants.  They call themselves ‘Muntanchi’- ‚most loving people of mother earth’ and followed a shamanistic religion called ‘Mun’. A Bomthing (male shaman) or Mun (lady shaman) is consulted in case of problems or obstacles. Every year Lepcha shamans still gather at Kabi Lungchok to make offerings and give thanks to nature, medicinal plants and the protection of the Mt. Khangchendzonga deity. Lepcha are divided into many clans, each of which reveres its own sacred lake and mountain peak from which the clan derives its name.
The Lepcha refer to their land as ‘Nye-Mal-Ale’ which simply means ‘heaven’. They have folklore and tales that suggest they have inhabited the region since time immemorial, have their own language and script and are subsistence farmers and in remote areas hunting, fishing and gathering still play an important role. The heartland of the Lepcha is Dzongu in North Sikkim. Here many people still live in small hamlets scattered across the rugged land. As per census 2001 about 7 % of Sikkim’s population are Lepcha. 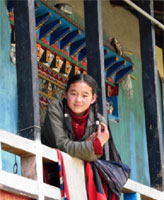 In the 9th century the Bhutia (or Denzongpas) migrated to Sikkim from Tibet and introduced the Nyngma-order of Mahayana-Buddhism. They call Sikkim ‘Denzong’ – ‘valley of rice’. Through the Tibetan saint Lhatsun Chempo Buddhism was consolidated in Sikkim in the 15th century and the first monasteries built at Yoksum, Sanga Choeling and  Pemayangtse. At the same time monarchy was established in 1642 at Yoksum and it lasted until 1974. The Bhutias have been instrumental in both the ruling of Sikkim through the Chogyals-dynasty and the consolidation of the Nyingma-order of Buddhism the state. Their native language is Sikkimese, a language similar to Tibetan and Dzongkha of Bhutan. With only about 70’000 Bhutia left in Sikkim the  language their language today is vanishing as Nepali is spoken by the vast majority in Sikkim today. Most Bhutia follow the Nyingma or Kagyu order of Tibetan Mahayana Buddhism. Among the Bhutia, the Lachenpas and Lachungpas of North Sikkim today still have their own traditional legal system called the "Dzumsa" which means the meeting place of the people. The Dzumsa is headed by the village headman known as the Pipon. Bhutia women enjoy a much higher status than their counterparts from other communities. The Bhutias are mostly employed in the government sector or engaged in agriculture. As per census 2001 about 13 % of Sikkim’s population are Bhutia.

The Limbu (Limboo/Tsong) are indigenous to the hill and mountainous regions of Nepal, Southern Tibet, Sikkim and Bhutan. The Limbu of Sikkim are said to have moved from the district of Tsang/Tsong in Tibet, following their Guru Matog Lama to Sikkim. Limbu clans include Rai and Sunuwar and they are believed to have settled in Sikkim much before its consolidation as a kingdom by the Chogyal-dynasty. Limbu follow their own religious rituals containing Buddhist, Shamanist and Bön-aspects. They also have their own language and script.
Sikkim’s Chief Minister Pawan Kumar Chamling is Rai and he has governed the state for four successive terms since 1994. 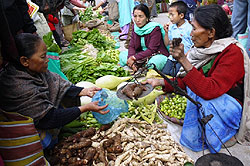 From the 19th century onwards many Nepalese migrated to Sikkim. They introduced the cultivation of rice in   terraced paddy and the cultivation of black cardamon. This improved Sikkim’s agriculture on one hand and on the other caused erosion and destruction of forests. With the exception of Sherpas, Tamang and Gurung the majority of Nepalese people are Hindus. Today Sikkim’s population is probably made up of over 80 % by Nepalese. 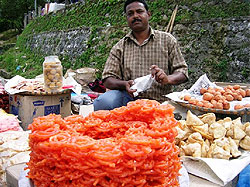 Other communities that have migrated in Sikkim include Newari, Marwari, Bihari and Bengali. They are engaged with trade and business and speak mostly Hindi. Sikkim is also home to many Tibetan refugees as the Chogyal of Sikkim granted land and refuge to them in regions of Sikkim.