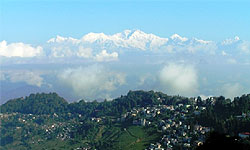 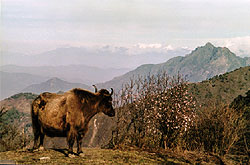 Besides the tea town Darjeeling and its world famous tea, the hilly district within the Indian state of West Bengal also carries the same name.

The region extends in the North to the state of Sikkim, in the South to the city of Siliguri and majority of its population originate mainly from nearby Nepal. Amongst Darjeeling district’s important hill-towns are Darjeeling, Kalimpong and Kurseong.

It is in the tea gardens surrounding the town of Darjeeling where some of the world’s most exquisite teas are grown. Located at around 6’500 ft Darjeeling once was the summer-residence for British India’s administrators who were eager to escape the sweltry, hot humidity of the administrative centre in Kolkota. It is here, in the cool hills of Darjeeling where the British introduced tea-cultivation with the help of labour from Nepal. 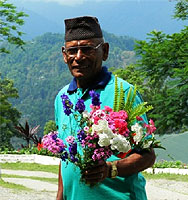 The famous “Toy Train” was built around the same time the transportation of tea. It is the first hill railway in India and amongst one of the first ones in the world. Established in 1881, the “toy train” is operating and retaining most of its original features until today.

From the ridges of Darjeeling’s hills the panoramic views onto its tea-gardens and Himalayan mountains, including Mt. Khangchendzonga of Sikkim and Everest, Lhotse and Makalu of Nepal on a clear day are fantastic.

In the lovely town of Kalimpong, located lower at 4100 ft has pleasant climate and many small nurseries that cultivate orchids, cactuses and other flowering decorative plants for India’s cities. Missionary churches, Buddhist monasteries, Bhutanese houses and Hindu temples tell stories about the interesting history of this area. 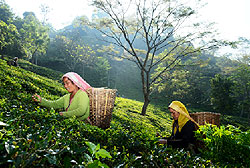 Till the beginning of the 19th century, Kalimpong town and its surrounding region was part of the Himalayan Kingdom of Bhutan. The Bhutanese Monastery Thongsa that was unfortunately damaged during the Gorkha-insurrection in the 1980ies, is one of a few reminders of this era.

The rural areas south of Kalimpong from the plains to the town of Kalimpong offer wonderful opportunities to explore – by foot or jeep - Nepali agrarian societies off the beaten track. 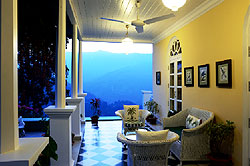 Further East of Kalimpong town lies the region Dooars, the door to Bhutan. Besides vast tea gardens Dooars also has some beautiful sanctuaries that are ideal for nature- enthusiasts wanting to discover the flora and fauna of the Himalayan foothills. Besides a vast avian variety these sanctuaries provide habitat for elephants, leopards and even the Indian rhinoceros. Dooars is also famous for its rich culture, handicraft and the colourful markets of the indigenous people. Darjeeling and Kalimpong can be easily combined with a visit to Sikkim.