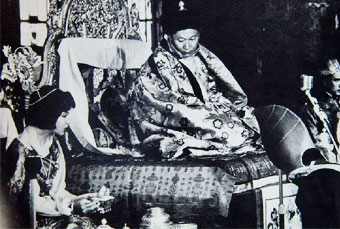 Sikkim was a Buddhist kingdom under the Namgyal-Chogyal dynasty from 1642 to 1975.
Time and again the little kingdom had to defend itself against attacks from Nepal. 1835 the area of Darjeeling - that had been part of Sikkim until then - was annexed by British India. Sikkim was a protectorate first of British India and after its independence in 1947 of India. With foreign policy and national defense in the hands of India the political influence of Sikkim became more severely restricted when the new Constitution came into force in 1955. Bureaucrats planned to bring the monarchy to an end in 1973 and India in turn, increased its influence. The Chogyal (king who governs with righteousness) Palden Namgyal Thodup was crashed in 1975 and Sikkim merged with India as its 22nd state. 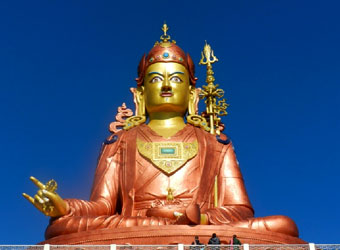 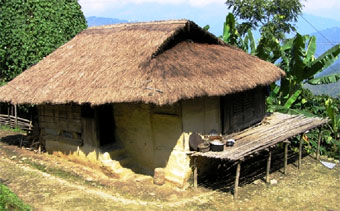 The first known people to occupy Sikkim are the Lepcha. Their cultural traits such as dress and family norms show close affinity with the Khasi of Meghalaya, and linguistically, they have a lot in common with the Tangkul Naga of Northern Manipur. Earliest historical records mention the passage of the Buddhist saint Padmasambhava through Sikkim in the 8th century A.D. Guru Padmasambhava, also known as Guru Rimpoche introduced Buddhism and predicted that a century later the era of monarchy would arrive. 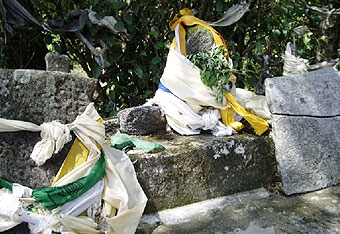 Guru Tashi, a prince of the Kham district in eastern Tibet had a divine vision to go south and seek his fortune in ‘Denzong, the valley of rice’. As directed, he heads in the southern direction with is family that includes five sons. During their wanderings, they enter a Sakya kingdom where the construction of a monastery is being held back with the workers’ inability to erect the pillars. The eldest son of Guru Tashi helps in raising the pillars single-handedly and thereon comes to be known as Khye Bumsa, meaning, ‘the superior of ten thousand’. The Sakya king offers his daughters hand in marriage to Khye Bumsa, and the couple settle in the Chumbi Valley. 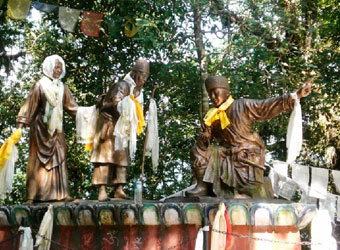 Khye Bumsa’s wife is barren and the couple are advised to seek help from the Lepcha priest king, Thekong Tek who rules (Sikkim) the area south of the Chumbi. Having received the blessings of Thekong Tek, Bumsa’s wife is able to bear three sons, and out of gratitude he visits the grand old sage several times more nurturing an amicable relationship between them. Ironically, Thekong Tek himself is without an offspring to inherit his kingdom. It is said that he allowed Khye Bumsa to rule after his death following a covenant of blood brotherhood between them at Kabi Lungchok, on a solemn oath that he would not discriminate his newly acquired Lepcha subjects. It is a fact that most among Khye Bumsa’s nobility each took a Lepcha spouse to attest the pledge.

Foundation of the Monarchy 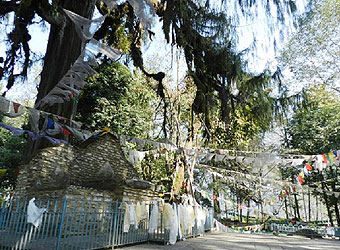 Events of the persecution of the Nyingmapa sect in Tibet lead to their fleeing the country and taking refuge in places like Sikkim and Bhutan. In 1642 Phuntsog Namgyal, a fifth-generation descendant of  Khye Bumsa is consecrated as the first Chogyal in Yuksam by Rimpoche Lhatsun Chempo, the founder of the Nyingmapa order in Sikkim and two venerated lamas. Sikkim’s territory then included the Chumbi Valley in the north, up to Ha Dzong in Bhutan, as far as the Arun River in Nepal, and much of the Jalpaiguri District of West Bengal. 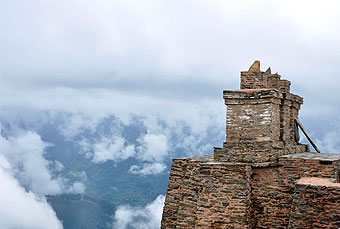 Phuntsog Namgyal, a fifth-generation descendant of Khye Bumsa, was consecrated as the first Chogyal (king who governs with righteousness) at Yoksum in 1642  by three venerated lamas. Phuntsog Namgyal was succeeded in 1670 by his son, who moved the capital from Yuksom to Rabdentse.

With the help of the Chogyal’s half-sister who had been denied the throne, Sikkim was invaded by the Bhutanese in 1700. With help from Tibet the Bhutanese were driven back and the throne to the Chogyal was restored ten years later. Sikkim loses Kalimpong and all territories east of it to Bhutan.
Between 1717 and 1733, the kingdom of Sikkim faced many raids by the Nepalese in the west and Bhutanese in the east, culminating with the destruction of the capital Rabdentse by the Nepalese. To support Sikkim and defend Tibet against the Gorkha Kingdom of present day Nepal, China sent troops to support Sikkim. With the subsequent defeat over the Gorkha it was the Chinese Qing Dinasty that established control over Sikkim.

Sikkim during the rule of the British in India

During British rule in neighboring India, Sikkim allied with Britain against their common adversary, Nepal. Reacting to a Nepalese attack that affected much of Sikkim including the plains of the Terai the British East India Company was prompted to attack Nepal, resulting in the Gurkah war of 1814.
Treaties signed between British India and Sikkim resulted in the return of some, but not all occupied territory to Sikkim.

The intervention by British India following their war with Nepal, and the signing of the Treaty of Titaliya between British India and Sikkim restores some of the Nepalese occupied territory though not all.

British Commercial Resident of Malda, J. W. Grant, and Captain Lloyd visit the Darjeeling area in a matter concerning a dispute between Nepal and Sikkim. Quick to notice the position of Darjeeling as a prospective hill resort and an outpost for trade with Tibet, they forward the proposal to their government.

Darjeeling is leased from the Sikkim Raja for a fee of Rs. 3,000 per annum.
Ties between Sikkim and the British weakened when the latter began taxation of the Morang region.

Darjeeling becomes famous in the Raj as a hill station and a sanatorium. Trade with Tibet develops and tea estates flourish all around its hilly slopes. In Darjeeling the British planted with the help of Nepalese workers the first tea gardens. Equipped with more pleasant climate than Kolkota, the British make Darjeeling a hill station for their administrators.

Two British physicians, Sir Joseph Dalton Hooker and Dr. Archibald Campbell, the latter being in charge of relations between the British and Sikkimese governments, ventured into the mountains of Sikkim unannounced and unauthorized. The doctors were detained by the Sikkimese government, leading to a punitive British expedition against the kingdom, after which the Darjeeling district and Morang were annexed to British India in 1853. The invasion led to the Chogyal of Sikkim becoming a titular ruler under the directive of the British governor.

In 1865 Kalimpong is ceded by the British Indian Empire from Bhutan and vies with Sikkim and Darjeeling as a Tibetan trading post.

Claude White becomes the Political Officer in Sikkim with a task to keep a tight rein on the activities of the Sikkim Raja and his ministers. Soon after, a number of intriguing incidents occur. Two heirs apparent to the throne of Sikkim die in mysterious circumstances, leaving the throne in the hands of second-in-line princes, who by royal decree had actually been groomed for monkhood.

Sikkim became a British protectorate, and was gradually granted more sovereignty over the next three decades.

Oxford educated Sidkeong Tulku, the 10th Chogyal ascends to the throne introducing administrative and political reforms but his rule is short-lived. He dies within a year of enthronement. He is succeeded by his brother, Tashi Namgyal.

Pilot Officer Crown Prince Paljor Namgyal takes up bomber duty in the Royal Indian Air Force and is killed in action during World War II, while on the home front some disgruntled Sikkimese start a peoples movement to do away with the feudal system and are successful. The king takes refuge in the Political Officer’s residency and asks to be reinstated to his throne. Conceding to certain demands of the P.O., Sir Tashi Namgyal’s throne is restored and the 30-day republic annulled. In 1949, the Indian government installs a Dewan from its side to serve as the state’s chief administrative officer.

When India became independent in 1947, a popular vote rejected Sikkim's joining the Indian Union, and Prime Minister Jawaharlal Nehru agreed to a special protectorate status for Sikkim. Sikkim came under the suzerainty of India, which controlled its external affairs, defense, diplomacy and communications, but Sikkim otherwise retained administrative autonomy.

A state council was established in 1953 to allow for constitutional government under the Chogyal. Meanwhile, the Sikkim National Congress demanded fresh elections and greater representation for Nepalis in Sikkim.

China attacks India. There is a massive build-up of Indian troops inside Sikkim.

Lhendup Dorji Kazi, a former Sikkim Council member leads a peoples-agitation against the monarchy making demands for a one-man one-vote system. To maintain parity between the Bhutia-Lepcha minority (25%) and the Nepalese majority (75%), a single Bhutia-Lepcha vote was equivalent to six Nepali votes. In 1973, riots in front of the Chogyal’s palace led to a formal request by the Chogyal for protection from India. 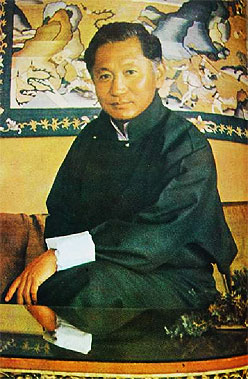 In 1975, the Prime Minister of Sikkim appealed to the Indian Parliament for Sikkim to become a state of India. In April of that year, the Indian Army took over the city of Gangtok and disarmed the Chogyal's palace guards. Thereafter, a referendum was held in which supposedly a majority of voters supported abolishing the monarchy, effectively approving union with India. However, the legitimacy of this referendum-vote has been widely criticized. Although the union with India was presented as the will of the people by the India authority, the merger was widely criticized as an annexation and India was accused of exploiting the ethnic divide and rigging the referendum. On 16 May 1975, Sikkim became the 22nd state of the Indian Union, and the monarchy was abolished. To enable the incorporation of the new state, the Indian Parliament amended the Indian Constitution. First, the 35th Amendment laid down a set of conditions that made Sikkim an "Associate State," a special designation not used by any other state. Later, the 36th Amendment repealed the 35th Amendment, and made Sikkim a full state, adding its name to the First Schedule of the Constitution.

Death of Sir Tashi Namgyal. Palden and Hope succeed to the throne as Chogyal and Gyalmo.

In 2000, the seventeenth Karmapa, Urgyen Trinley Dorje, who had been confirmed by the Dalai Lama and accepted as a tulku by the Chinese government, escaped from Tibet, seeking to return to the Rumtek Monastery in Sikkim. Chinese officials were in a quandary on this issue, as any protests to India would mean an explicit endorsement of India's governance of Sikkim, which China still recognized as an independent state occupied by India.

On 6 July 2006, the Sikkimese Himalayan pass of Nathu La was opened to cross-border trade, becoming the first open border between India and China. The pass, which had previously been closed since the 1962 Sino-Indian War, was an offshoot of the ancient Silk Road.